The Miscelanea Guitar Quartet was founded in April 2007, when four young guitarists met at the Mozarteum University, Salzburg (Austria). Drawing on the varied musical experience of their different cultures, the Miscelanea Guitar Quartet brings a fresh vision to the art of playing the classical guitar. With a strong sense of the terms 'classical' or 'traditional', their collaboration is geared towards reinterpreting familiar compositions, working with contemporary musicians - many of whom compose works for them to play - and producing music that speaks to people living in the 21st century. They also hope to foster creative relationships with other musicians and art-forms, such as dance or the visual arts.

During the five years of its existence, the quartet has received constant guidance and support from renowned musicians such as Eliot Fisk, Ricardo Gallén, Marco Tamayo, Maria-Isabel Siewers de Pazur, Mathias Seidel, Martin Mumelter, Simone Fontanelli, Caroline Widmann, among others.

Their repertoire consists of well-known works by contemporary composers, including Leonardo Balada, Ian Krouse, Dusan Bogdanovic, Daniel Bernard Roumain (DBR), as well as original compositions performed, and some of them recorded, for the first time by the quartet. These are:

which were recorded in the studio of the Austrian Television ORF, in April 2008.

- “Atem Pause” by Mayako Kubo (2008/09) - Work written especially for the Miscelanea Guitar Quartet, after they had won the special prize in the International Festival of Contemporary Music, Mozarteum, April 2008.

The Miscelanea Guitar Quartet has been awarded with: 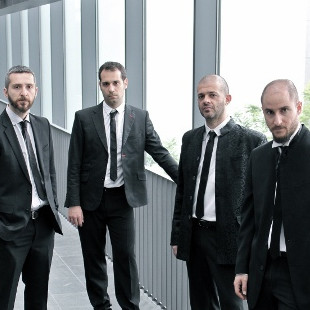